During my study I experienced the joy of creating something, anything, out of nothing, and to share this joy with other people, during the process and when you show it to an audience. Even if it’s your mom and dad. For me, film is pure magic, touching people’s heart or soul for a moment.

I think your environment is the most important part. And life, the people you meet, stories you hear, experiences you have, that’s all for free. So, it’s possible to create this environment yourself, like I did:  watching a lot of movies, reading books about it, and learn by trial and error. If I could go back in time, I definitely would go to an institute, because the environment there is all about film. But essential, no.

It’s a constant battle, but that’s the fun of it! You need to overcome all sort of little things, during your writing, while directing and editing, but when you do, you experience this little, brief moment of joy, that is trapped between the moments of wondering, frustration, fear, doubt, desire… But those little moments…this feeling you conquered something, is just heavenly. There are moments you need to step away from the project, get your head clean. To step away, for me, is harder than to get started or keep going.

It can be a little scary to share your script with others. And when you work with your crew and cast there are like 7 million opinions on the script, the art direction, the shots etc. The trick is to pick out the best, the things that fuels the story, not the ones that turn the story in the wrong direction. If you can balance this, and act with love for the story and the people, the film will become even better than you ever imagined.

There were none. Just make the best of it. There’s this limited budget you work with, the limited experience you have. But just go for it and accept these boundaries and make them your strengths. I don’t like no for an answer, but you get them a lot. I just stay focused on the yesses, without compromising the story.

It wasn’t really hard, but I had to convince a lot of people, that there wasn’t a scene of light or joy in this movie, where the audience could take a breath. I just wanted to have the audience a really bad experience, like the real people had this story is about.

We always wanted to work with Twan Peeters (dop) and he introduced me with Yin Lee (sound design) and Natalia Tsupryk (music). Zara was the daughter of a friend. I asked Astrid van Eck and Bert Hana myself they were already very experienced, and I really appreciate the trust they gave me. The important thing is that the cast and crew is loving and caring, not just for the story, but for the people who are bringing this story to life too. During the production and on set it’s about trust and having fun and exploring each other’s talent. People are investing a lot of time in your film. You create a memory for the rest of your life, so you better make it worthy.

The cynical me would say the mainstream audience just want some lame entertainment to forget about their own pity life for a moment. And they are provided by an industry that only cares for the dollars. But that’s just a small part of me, coming out on days when I’m frustrated about my own life or when the weather is really bad… I think you shouldn’t worry about what the audience want as a filmmaker, but if you can adjust your story so it appeals a greater audience, you should. You need to guard your intentions, and the soul of your film, though. I think they get away with lame movies, but truly score with a good one.

For the first short film The Peeker I received Best Director at the international film festival Film by the Sea in the Netherlands. Being new to the scene, this was such a boost. But even without the awards, as a visitor I just love film festivals. They are a gift trough of stories and a warm place of appreciation for filmmakers.

I think any filmmaker should do whatever they want. Tarantino is inspired by other filmmakers, but he creates his own world with that, using safe cinema styles and unconventional storytelling at the same time. Suits him, and I’m loving it. I like to be original, but what is original? If you haven’t seen anything like this before, you can call it original. A lot of stories are already told, it’s your perspective that can make old stories original and fresh.

krisstina ioana
View More Posts
People say nothing is impossible, but I do nothing everyday. 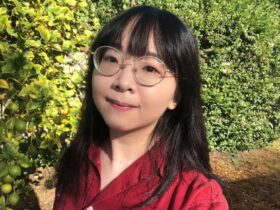 The TINCAN Magazine is a perpetual container for the distribution or storage of culture, art, and its creators. Contribute or Participate in Competitions to fill The TINCAN with your own story!
Learn More
We use cookies on our website to enhance your user experience. If you continue without changing your settings, we'll assume that you are accepting our use of cookies as described in our Cookie policy.
.
Cookie SettingsContinue
Manage Cookie Settings

This website uses cookies to improve your experience while you navigate through the website. Out of these, the cookies that are categorized as necessary are stored on your browser as they are essential for the working of basic functionalities of the website. We also use third-party cookies that help us analyze and understand how you use this website. These cookies will be stored in your browser only with your consent. You also have the option to opt-out of these cookies. But opting out of some of these cookies may affect your browsing experience.
Necessary Always Enabled
Necessary cookies are absolutely essential for the website to function properly. These cookies ensure basic functionalities and security features of the website, anonymously.
Functional
Functional cookies help to perform certain functionalities like sharing the content of the website on social media platforms, collect feedbacks, and other third-party features.
Performance
Performance cookies are used to understand and analyze the key performance indexes of the website which helps in delivering a better user experience for the visitors.
Analytics
Analytical cookies are used to understand how visitors interact with the website. These cookies help provide information on metrics the number of visitors, bounce rate, traffic source, etc.
Advertisement
Advertisement cookies are used to provide visitors with relevant ads and marketing campaigns. These cookies track visitors across websites and collect information to provide customized ads.
Others
Other uncategorized cookies are those that are being analyzed and have not been classified into a category as yet.
SAVE & ACCEPT